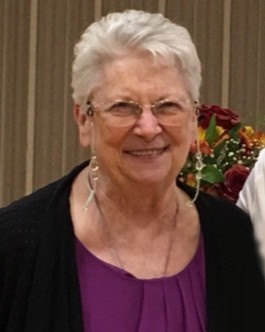 Betty Louise McArthur Griffin, a beloved high school teacher and long-time resident of Roosevelt, Utah, passed away peacefully at the age of 78 on June 13, 2020, after a long struggle with her health.  She spent her last days in her daughter’s home in Roosevelt, Utah, surrounded by loved ones.
She was born September 4, 1941 in Cleveland, Utah to Claude G. McArthur and Vera Faye Bishop. She spent her early years in Cleveland until her father was killed in a mining accident when she was 7.  When her mother remarried three years later, the family moved to Price, Utah. She graduated from Carbon High School and from the College of Eastern Utah with her Associates Degree in 1959. She earned her bachelor’s degree from Utah State University in Logan in 1966 and her Bachelor of Fine Arts followed in 1968.
She loved theatre, music, literature, poetry, creative writing, watching movies, reading, sharing a good meal and good conversation, and the Gospel of Jesus Christ. Betty was a talented musician and actress. Betty has always been passionate about music. She began singing in her early youth and continued throughout her entire life. She could also play the French horn, accordion, piano, trumpet, trombone, and the clarinet. She absolutely loved classical music, opera, musicals, and Hymns. She spent most of her life performing in school and church choirs.
Betty also loved to act and direct. She started her performance career in her youth doing local productions with the MIA. She acted and directed in several shows in high school theatre, and even more at Utah State University where she majored in drama. During the summer she would participate in summer stock programs throughout the West. While at Union High School she directed many plays, most notably their adaptations of Disney’s Beauty and the Beast and Aladdin. Betty was also instrumental in bringing Dinner Theatre to the Uintah Basin through Utah State University’s campus extension. Betty was also appointed and served on the Utah State Fine Arts Council for several years.
She met her husband, Wayne, while at Utah State University. They married on July 22, 1966 in Price, Utah. Two years later, they were sealed for time and all eternity in the Logan Temple.
She began her teaching career in Idaho Falls, Idaho with some stopovers in Delta, Colorado, and Randolph, Utah. Wayne and Betty then moved to Southern California where Wayne pursued his career. It was there that all four of their children were born.     Wanting to be closer to their families back in Utah, Wayne took a job in Roosevelt in
1977, where they have made their home ever since. Betty resumed her teaching career in 1978 at Union High School. During Betty’s 27-year tenure, she taught English, mythology, drama, choir, band, Academic Decathlon, student council, ceramics, and stained glass. She was an educator for over 30 years in total. She was also an avid supporter of all athletics and other extracurricular activities.
Betty was an active and fervent member of the Church of Jesus Christ of Latter-day Saints. Throughout her life she served as a teacher in Primary, Young Women, Gospel Doctrine, Sunday School, Relief Society, and Family History. She also served a mission with Wayne in the Ohio-Cleveland Mission from September 2007 to August 2008. After returning from their mission, Betty and Wayne served in the Family History Center in Roosevelt for several years. Betty loved her calling as an Ordinance Worker in the Vernal Utah Temple and only gave it up in order to care for her mother.
She is survived by her husband of nearly 54 years, Wayne; sons: Doug (Stacy) Griffin, Shane Griffin (Penny Eidson), Chris (Connie) Griffin, and daughter Deborah (Terry “Chub”) Hackford; grandchildren: Nathan Griffin, Kaytlynn (Derek) Lamb,  Russell Hackford, Melinda (Shane) Rich, Melissa (Cesar) Onton, Jana (Ed) Evans,  Justin (Caitlin) Farnsworth, Natalie (Cody) Muir; 15 great grandchildren; sisters: Kathryn (Ross) Collard, Nadine (David) Shiner, brother-in-law, Val Dean Larsen, sister-in-Law Diana Johansen, and Wayne’s siblings Judy (Lester) Neilsen, Kenny Griffin, and Johnny (Janice) Griffin.
Betty was preceded in death by her parents, her brothers, Kim and Paul, and her sister, Sandy.
A viewing and visitation will be held on Wednesday, June 17, 2020, at the Roosevelt Stake Center at 9:30 am. The funeral will follow at 11:00 am.
Graveside service will be the following day, Thursday, June 18, 2020, at 1:00 p.m. at the Cleveland Memorial Park, Cleveland, Utah.
The family would like to thank her daughter Deborah for all the love, care and compassion that was shown to make her last few years as comfortable and pleasant as possible.

To order memorial trees or send flowers to the family in memory of Betty Louise Griffin, please visit our flower store.