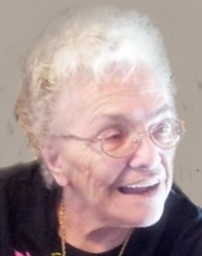 Barbara Elaine Roan Sander, age 81, of Roosevelt, passed away May 17, 2018, in Salt Lake City.
She was born January 25, 1937, in Lead, South Dakota, to Ralph Roosevelt Roan and Grace Daisy Gamber.  She married Bernard Dean Sander and he died September 15, 2006.
Barbara had a great fondness for shopping, but also being in the mountains, especially the Black Hills of South Dakota.  Her two favorite things were the color pink and a Pepsi.  She loved animals, joking around with people, and watching her grand- and great-grandchildren as they played.  One of her pastimes was watching westerns of any type, but especially those with John Wayne in them.  She was proud to have served with her church as a clerk and librarian.  She was very much loved and will be greatly missed.
Barbara is survived by her children, Tina Marie (Ed) Smith, Traverse City, Michigan; Katherine (Ron) Shuck, Roosevelt; Bernard Gene (Donna) Sander, Bluebell; 9 grandchildren; 18 great-grandchildren; and numerous nieces and nephews.
She was preceded in death by her husband, Bernard; parents, Ralph Roan and Grace Major; siblings, Darlene Larsen, Claudine Roan, Wayne Major, Willma Whooten, and Pearl Bennett.
Per her wishes she was cremated and there will be a family memorial service at a later date in South Dakota.

To order memorial trees or send flowers to the family in memory of Barbara Elaine Sander, please visit our flower store.