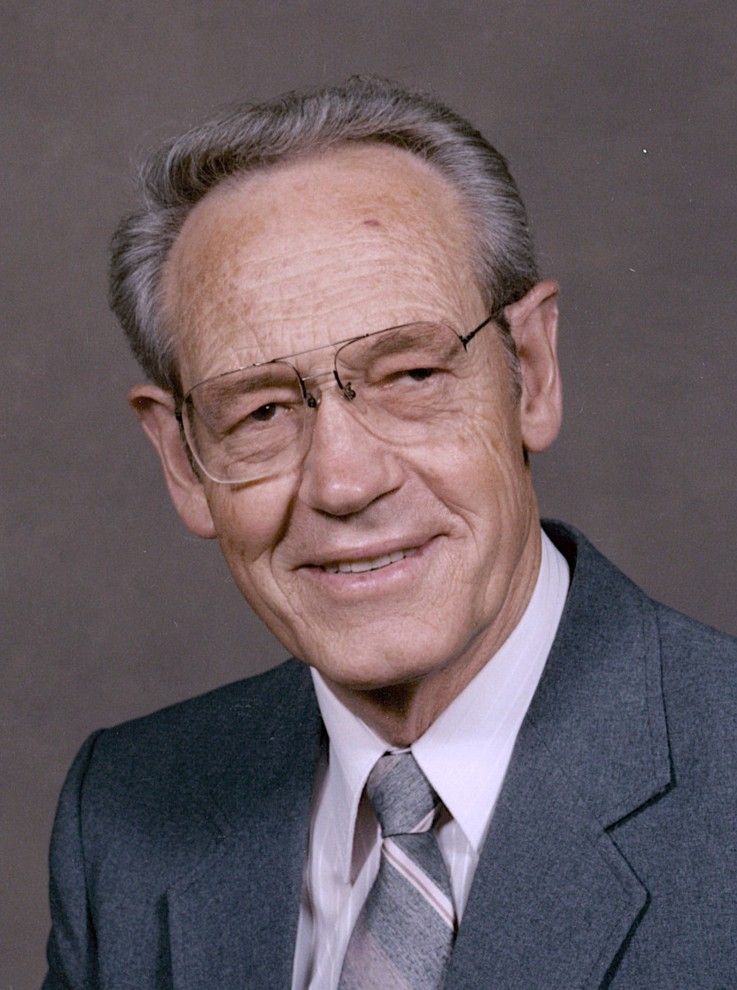 Funeral will be live-streamed HERE.

Arvin Leonard Bellon passed away peacefully on May 29, 2022, surrounded by his loving family.  He was 95 years old. He was born February 16, 1927 to Francis Xavier Bellon and Eva Mae Wimmer, one of 16 children.
Arvin joined the Coast Guard in February 1945.  He was accepted to Radio School in Atlantic City, NJ and was given a special assignment to learn Morse Code and be stationed in Kauai, HI.  He was there until the war ended and returned home in May 1946.
After attending BYU, Arvin met Maurine Gilbert while working at the Roosevelt movie theater.  They married on January 21, 1952, in the Salt Lake Temple.  Throughout their marriage, they complemented one another perfectly and were tenderly devoted to each other. They added 6 children to complete their family; Becky (Stewart Morrill, deceased; Jerry Smith); Jan (Roger Loren Mulligan); Brent Gilbert, deceased; Sheri (Michael Peterson, deceased); Greg Bryce (Marlena Spencer); and Gary Brian. They have 14 grandchildren, 23 great-grandchildren and 2 great-great-grandchildren.
Arvin always felt grateful to raise his family in the small, close-knit community of Roosevelt.  He and his family enjoyed the things the Basin had to offer, namely camping, fishing and hunting. Arvin also found his talent in oil painting which he pursued as a hobby. He continued these activities even as his church and civic duties grew. Being influenced by Maurine’s love of cooking, he found his niche as the family camp cook and perfected the art of dutch ovens, pancake breakfasts and trout fries. After spending most of their lives in Roosevelt (which will always be home), they lived the past 18 years in Orem, Utah.
Arvin was appointed Postmaster for Roosevelt at the age of 23 by Harry Truman in May 1950.  He served in this position until his retirement in 1985.  During his tenure, the Post Office grew from a small second-class facility to a first-class office.  In the beginning, because of the small community, people came to the Post Office to pick up their mail.  This made the Post Office a social gathering place, but later, when home mail delivery was initiated, people said it was the thing they missed most.  Arvin diligently served in his community as well, with the March of Dimes, Kiwanis, Polio Advisory Committee, Chamber of Commerce, City Zoning and Planning Committee and the Utah Chapter National Association of Postmasters.
While in his youth, Arvin gained a testimony of the restored gospel as a member of the Church of Jesus Christ of Latter Day Saints and bore powerful witness throughout his life. He served faithfully in many religious capacities within the Church, most visibly as Bishop, Stake President, Patriarch, and Temple Sealer. He and Maurine served a mission in the Wisconsin Milwaukee Mission from 1994-1996 where they made many life-long friends.
Arvin’s influence has reverberated through many over the course of his life.  Regardless of the sacrifice required, he rallied for those that had no voice and was incredibly charitable and willing to help anyone in need. He was a trusted friend and loved by many.  Arvin was asked to speak at over 120 funerals in his life and he felt it an honor to be asked at each one.
Arvin’s continuing legacy to his posterity is that we have witnessed his faith, honesty, humor, humility, compassion and above all, a life of service. He worked hard to provide for his family and taught us strong work ethics through early morning gardening and custodial work. His lifelong example inspires us to be our best.
Funeral Services will be held Friday June 3, 2022, at 2pm at the Aspen 4th Branch Chapel on 828 W 1600 N in Orem.  Viewing will be from 12:30 - 1:45pm.
A viewing will be held at Hullinger Mortuary in Roosevelt on Saturday June 4 at 11am.  This will be followed by interment at the Roosevelt Memorial Park at 12:30 pm.
Everyone is invited to attend.

To order memorial trees or send flowers to the family in memory of Arvin Bellon, please visit our flower store.