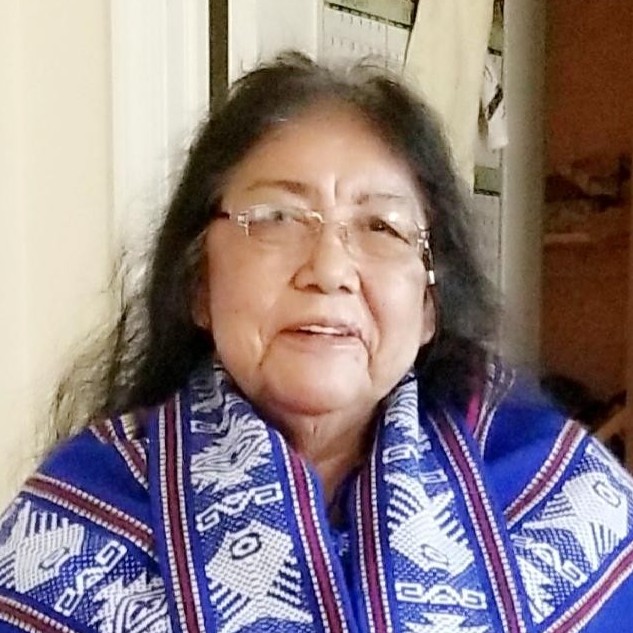 Angela Louise Ioupe, age 70, of Ft. Duchesne, passed away on March 28, 2018, at the Utah Valley Hospital in Provo.
She was born April 27, 1947, in Ft. Duchesne, to Elmer and Winnie Arrum Ioupe.  She married Hubert Carter, and he died on October 11, 1994.
Angela had been in an accident when she was in her teens that left her without her legs, but that didn’t stop her from living a full and productive life.  She worked at a clothing factory as a seamstress and really enjoyed that work.  She liked to listen to music – two of her favorite artists being Freddie Fender & Elvis Presley.  She was a shop-aholic and almost considered Wal-Mart to be her second home.  Her other pastimes included: playing cards, going on long drives, being in the outdoors, watching movies, and especially making conversation with family and friends.  She was very traditional in her Native ways and was a member of the Native American Church, and also attended Pow Wows and Sundances.
Angela is survived by her children, Adolph Chavez, of New Mexico; Hubert Kurtis Carter, Ft. Duchesne; Jeffrey Carter, Ogden; brothers and sisters, Riletto (Lesa) Sireech, Ft. Duchesne; Arlene Sireech (Reynolds) Reed, Mesquite, Nevada; Clayton Sireech, Lapoint; Rose Ioupe, Connie Manning, both of Whiterocks; nieces and nephews, Sela (Marcos) Bejerano, Christella (Gary) Trujillo, Sione (Alecia) Kaufusi, Phillip Kaufusi, Akosita Kaufusi, Gilbert Duffy, Robert (Caroline) Duffy, Anthony (Ashley) Tauaalo, Fololina Tauaalo; grandchildren, Anthony Montdragon, Latoya Garrison, Angelica Kaufusi, Brandon Caldwell, Emiliano Vega; and her beloved dogs, Amelia & Arelia.
She was preceded in death by her husband, Hubert; her parents, Elmer & Winnie; siblings, Michael John Ioupe, Eleanor Garrison, Barbara Garrison, Dale Ioupe; niece, Diane Garrison; nephew, David Tauaalo, and her dogs, Diamond & Chiquita.
Funeral services will be held on Monday, April 2, 2018, at 10:00 a.m. at the Hullinger Mortuary.  There will be a wake after 4:00 p.m. on Sunday at Kristella Trujillo’s home in Ft. Duchesne.
Burial will be in the Ft. Duchesne Cemetery.  Condolences may be shared at www.hullingermortuary.com

To order memorial trees or send flowers to the family in memory of Angela Louise Ioupe, please visit our flower store.