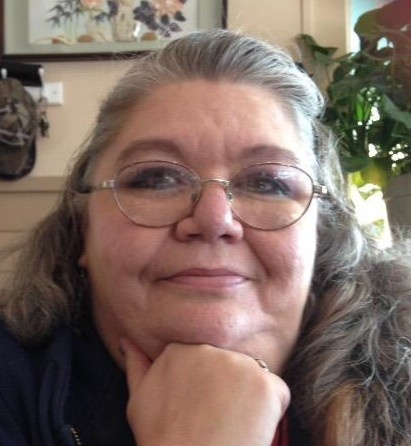 Amber Dawn Adams Carter, of Roosevelt, finally lost her battle with Diabetes and died at home on October 23, 2018 at the age of 54.
She was born September 3, 1964 to Larry and Maryo Adams in Logan. She married Stephen “Jeff” Carter April 5, 1985 in Elko, Nevada.
When she was young she lived in Saugus California & Sandy, but her home was Roosevelt.  She enjoyed making people laugh and you could hear her laughter across any room.  Amber adored her family and would do anything for them. She loved spending time with her grandson, Jager, with whom she was inseparable!
She enjoyed going to the coffee shop, camping, fishing, coloring, kids sporting events and visiting with everyone, and spending time with her sidekick, Demona (the dog).
Amber’s favorite job was working with the kids at East Elementary as a Teacher’s Aide. She also enjoyed her jobs at Chevron and Maverick where she could socialize with everyone!
She is survived by her husband “Jeff”; sons: Jeremy Carter and Cole Carter; mother: Maryo Adams; mother-in-law: Patricia Capps; sister: Tracy (Jeff) Womack, brother: Dustin (Jennifer) Adams; sisters-in-law: Sherrie (Steve) Barton, Carrie Carter; brothers-in-law: Shane (Teresa) Carter, Jordan (Mika) Carter; grandsons: Jager Carter, Braiden Carter, Ben Toponotes; nephews: Andrew Adams, Cassidy Adams, Branden (Brandy) Womack, Kyler Carter & Dakota Barton; nieces: Kelsey Adams, Challis (Mitch) Harding, Anastasia (Eric) Gause, Whitney Thompson, and special friend: Aaliyah Thuma.
She was preceded in death by her dad: Larry Adams; father-in-law: Stephen Carter; nephews: Gordon Adam Womack & Tyson Thompson and a special young man Daniel Rowley, her grandparents: Morris & Mary Mathews and Vesta Mae Adams Lee (with whom she had an amazing relationship).
We would like to thank Amber’s Favorite Nurse: Tanya Boren, whom she loved & adored, Dr. Wheeler and many other doctors and nurses that cared for her throughout the years.
Funeral Services will be held Saturday, October 27, 2018 at 11:00 am at the Roosevelt 2nd and 11th Ward Chapel of the Church of Jesus Christ of Latter-day Saints, 250 West 200 North.  Viewings will be held on Friday evening from 6 - 8 p.m. at the Hullinger Mortuary and Saturday at the church from 10:00 - 10:45 a.m.
Burial in the Roosevelt Memorial Park.

To order memorial trees or send flowers to the family in memory of Amber Dawn Carter, please visit our flower store.