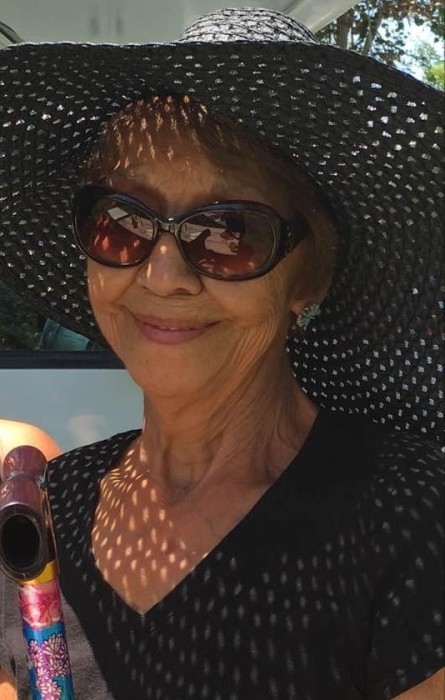 Alice N. DuShane, age 76, of Ft. Duchesne, passed away Saturday, February 24, 2018, at her home.
She was born April 14, 1941, in Ft. Duchesne, to Jasper Weech Cuch Sr. and Rebecca Arrowchis Cuch.  She married Elwyn Leon DuShane on January 31, 1960, in Vernal.  He died February 20, 1986.
Alice was worked as a medical assistant for the Uintah Basin Medical Center and had also been a secretary for the WIC program at the Ute Tribe.  She was an avid gardener and delighted in growing bright colored flowers.  She enjoyed going to Wendover, shopping at Wal-Mart (could have been her second home), and going to the mountains, especially Big Springs.  She was very thoughtful, loving, caring, and kind.  She had great humor.  She adored her grandchildren and loved family gatherings.  She was always concerned about others well-being and raised her granddaughters, Sweetwater and Raina Reyos.  She believed greatly in her native ways and took part in many Sweats and attended Sundances.
She is a survivor of colon cancer, but lost the battle with lung cancer.  Through it all she showed tremendous strength despite the pain and fought hard to the end.
She is survived by her companion, Alex Reyos; daughters, Cassandra (Everett) Manning, Ft. Duchesne; Michele (Gary) Black, Taylorsville; Nesa DuShane, Mesa, Arizona; Mary Nicole DuShane, Ft. Duchesne; grandchildren, Raina Reyos, Sweetwater Reyos (Isaac Serawop), Marlaina (Brandon) Harmston, Jasina & Christon (Tahlula) Black; Joseph & Joey DuShane-Navanick; Jeryon, Thalia, & Destiny Espinoza; 16 great-grandchildren; and numerous nieces, nephews, and other relatives.
She was preceded in death by her son, Elwyn Michael DuShane, her parents, and all of her siblings, Vincent, Wilbur, Jason, Henry T., Jasper Jr., John William, Frances Secakuku, and Mildred Louise Cuch.  She was the last surviving member of her immediate family.
Funeral Mass will be held on Wednesday, February 28, 2018, at 10:00 a.m., at St. Helen’s Catholic Church.  There will be a wake after 4:00 p.m. on Tuesday at her home in Sunshine Subdivision in Ft. Duchesne.
Burial will be in the Ft. Duchesne Cemetery.

To order memorial trees or send flowers to the family in memory of Alice DuShane, please visit our flower store.