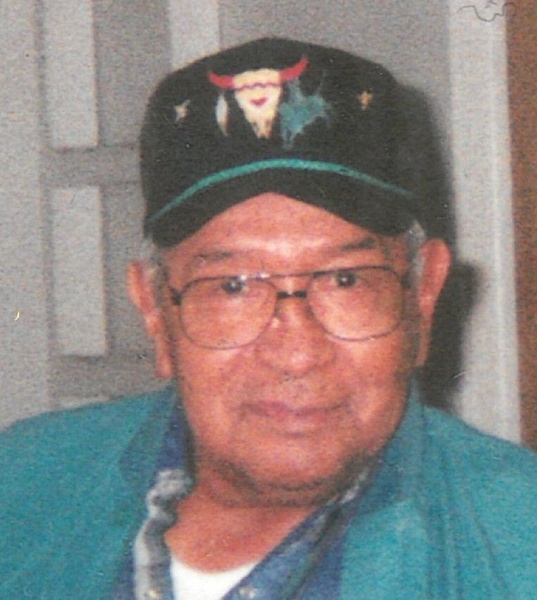 Albert Lee Poowegup, age 83, of Whiterocks, passed away July 16, 2021, at his home surrounded by his family.
He was born December 27, 1937, in Ft. Duchesne, to Casper and Rhoda Arhi Poowegup. He had been in the United States Army during peacetime and was stationed in Germany.
He married Alletta Chegup, and they later divorced. He married Glenda Alhandra, and they later divorced.
Albert was a man of all trades who had worked in construction, carpentry, leathworking, and other various jobs – everything he did, he did with precision. He was a very traditional man, being a Sundancer and a talented Handgame player all over the country. He had ridden in rodeos, was good with horses, and was a very good farmhand. His favorite pastime was gambling – especially at the Golden Nugget in Wendover where he was well known for his much luck with winning big! He enjoyed watching golf.
He was extremely proud of his children and grandchildren and often imparted much wisdom to his nephews, and was well loved by them. He had helped raise many other people’s children, teaching them good values, and good words.
Albert is survived by his children, Albertina Poowegup, Ft. Duchesne; Aaron Poowegup, Neola; Kimberly (Keith) Bussell, Gusher; Terrance Poowegup, Roosevelt; 14 grandchildren, 26 great-grandchildren, and 1 great-great-grandchild; siblings, Joan Lucero, Georgina Ridley, Frances Poowegup, all of Whiterocks; Nancy Reed, Whiterocks Road; Richard (Jolene) Poowegup, Ft. Duchesne; Deanna Poowegup, Whiterocks, and numerous nieces, nephews, and other relatives.
He was preceded in death by his parents; his siblings, Barbara Mart, Gary Poowegup, Beth Kakenwash, and Homer Poowegup.
Funeral services will be held on Wednesday, July 21, 2021, at 10:00 a.m. at the Whiterocks Community Building where a wake will be held after 4:00 p.m. on Tuesday.
Burial will be in the Whiterocks Cemetery with military honors presented by Ft. Duchesne VFW, Patriot Guard, and the Utah Army National Guard

To order memorial trees or send flowers to the family in memory of Albert Lee Poowegup, please visit our flower store.