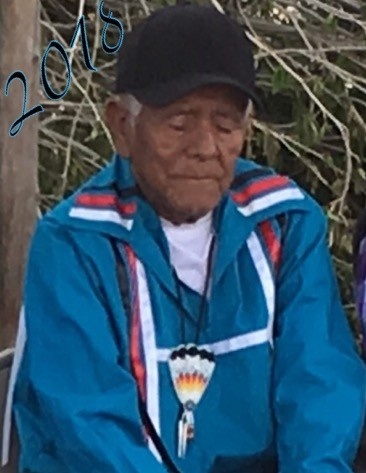 Albert Cornpeach, age 83, of Whiterocks, passed away June 2, 2019, at his home surrounded by his family.
He was born January 26, 1936, in Ft. Duchesne, to Joseph Cornpeach and Daphne Ice.  He married Flora Irene Cuch September 17, 1957 in Ft. Duchesne. She died October 1, 2007.
Albert worked for over 30 years as the maintenance worker at the Whiterocks Gym.  He was a traditional singer for many years and sang at Bear Dances and Sundances throughout the country.   He was an honorary Bear Dance Chief.  He was an avid hunter and outdoorsman, and he loved to walk all over Whiterocks and the surrounding area.  He had a fun-loving personality and was well known wherever he went.   He had a great sense of humor and could argue with the best of them.  He loved his children, especially the grandbabies.  He was a member of the Native American Church.
Albert is survived by his children, Alex, Richard, Russell, Frankie Cornpeach, Anna Cornpeach (Fernanda Nez), Jonathon (Stephanie) Cuch, all of Whiterocks or the surrounding area; grandchildren, Kayleena Cornpeach (Ramos Cesspooch); Rosebud (Martha) Cornpeach; Tony Cornpeach (Rochelle Mills), Nathaniel Cornpeach; Natasha, Alexcia, and Trista Cornpeach; Arden Cornpeach (Melanie Chegup); Jason Cornpeach (D. Arthur); 10 great grandchildren; and numerous others: LaReesa & Jessica Black; Rossalia Thompson; Soncery Salinas; Aivaaq Salinas; Jimme Dew, Franklin, Joylyn, Cedar Ann, Lee , Tyson, Kaiden, & Otter Cornpeach.
He was preceded in death by his parents, his wife, Irene; children, Alberta LaRose, Johanna Cuch, Daniel Cornpeach, Julie Cornpeach, Myleen Cornpeach, Edmond Cornpeach; brothers and sisters, Annie Manning, Darlen John, John Doe Cornpeach; aunts, Inez Loney, Anna Cuch.
Funeral services will be held at the Ft. Duchesne Community Building at 10:00 a.m. on Friday, June 7, 2019.  There will be a wake on Thursday, after 4:00 p.m. at the home of Kayleena Cornpeach in Whiterocks.
Burial will be in the Ft. Duchesne Cemetery.  Condolences may be shared at www.hullingermortuary.com

To order memorial trees or send flowers to the family in memory of Albert Cornpeach, please visit our flower store.