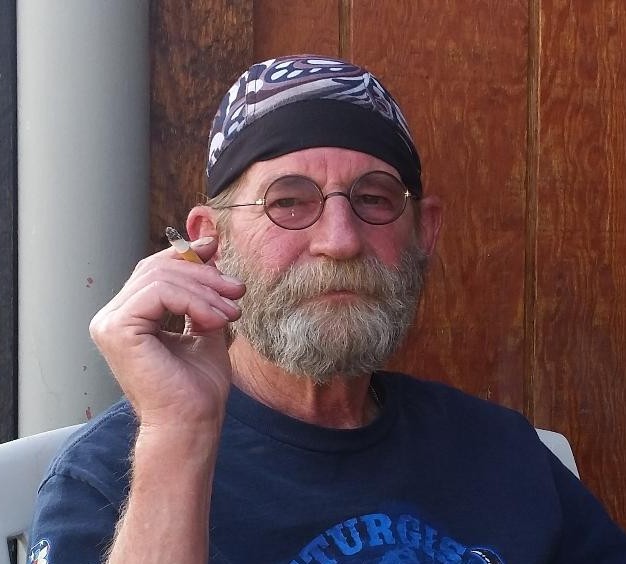 Alan Paul Russell, age 64, of Roosevelt, left this world on November 4, 2018 at the Utah Valley Hospital in Provo, Utah after a strong battle with cancer.
He entered this world on October 19, 1955 in Fort Ord, California.
We all knew him as Al or "JFA". When you walked through his door you knew you were welcome. He always thought of others above himself, even at the end his concern was for those around him. Anyone who knew him loved him.
He spent 30 years as a UDOT Mechanic before a back injury required his retirement. His passion for the "Blues" was well known, and was always playing on his sirus radio. He spent many hours reading history books about World War II in particular, and considered Winston Churchill his hero. He created diorama’s with a special eye to detail. His biggest dream was to ride the 101 down the road. He loved the freedom of riding the roads less traveled, no traffic at all was his wish while he was riding.
He left behind his wife, Katie Russell, children, Tiffany Russell, Samantha Russell, Tony (Teja) Wilson, Tonya (Darren) Thomas, George (Sarah) Wilson and Amber (Jake) Farnsworth, 21 grandchildren to continue his legacy of riding and to complete his dream of the 101. His mother, Jeri Cranmer Russell and his sister, Alison Russell Brewster.
The man we knew as J.F.A. was greeted by his son, Steve, his father, Sherman Glen Russell, his grandparents, Arthur Heber and Ila Burr Cranmer, Cyril Glenn and Catherine, his mother-in-law, Margaret Davis and a multitude of friends that called him brother, and are now riding with him again.
Memorial services will be held on Saturday, November 10, 2018 at 11:00 a.m. at the Hullinger Mortuary.   A visitation will be held 1 hour prior to the service.
When the warm weather returns his ashes will be spread at Parting of Ways, the place he loved the most, for its open plains and the feeling of freedom he felt when he was there.
In lieu of flowers the family requests donations to help with medical expenses.

To order memorial trees or send flowers to the family in memory of Alan Paul Russell, please visit our flower store.