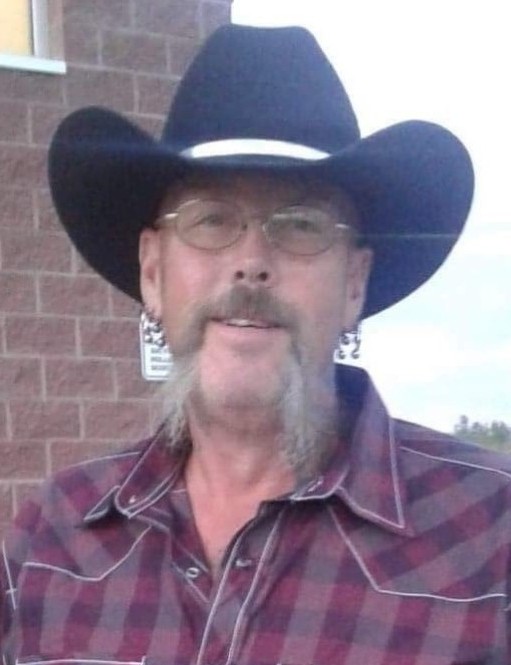 Alan Jay Ruffell, age 55, of Roosevelt, passed away March 22, 2020, at his home after a long battle with cancer.
He was born December 16, 1964, in Salt Lake City, to Robert Ruffell and Colette Carter.
Alan was a very outgoing person with a fun personality and a loving, big heart.  He made friends with everyone he met.  His stubbornness helped him deal with his many medical issues with a positive attitude and strength.  He was a “little big kid” who liked to go mudbogging in his truck, work at the Uintah Basin Livestock Sales Barn, shoot guns, and go hiking – even though he had a prosthetic leg.  His main interests, though, were tattoos and horses.
He took in many children and grandchildren that he claimed as his own.  He was a very strong fighter to the end. We will miss him dearly.
Alan is survived by his children, Nathan Alan Cochrane, Jennifer Fonohema,  Shanae Christensen, Jeremy Freestone, Preston Jay Ruffell, Colby Trey Ruffell, Alyssa Ruffell; his father Robert (Myrna) Ruffell; and a brother by choice, Chuck (Tonya) Brewer.
He was preceded in death by his mother and step-father, Collette & Rulon Hedelius.
There will be a viewing on Friday, March 27, 2020, from 2-4 p.m. at the Hullinger Mortuary.  Following the viewing, he will be cremated.
In lieu of flowers, please consider making a donation to help with funeral expenses.  You can do this by clicking on the "Donations" tab above.

To order memorial trees or send flowers to the family in memory of Alan Jay "Bubba" Ruffell, please visit our flower store.