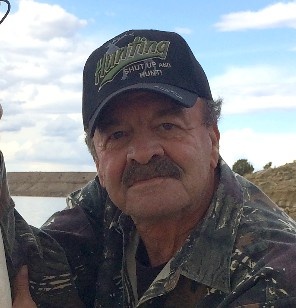 Alan Iorg, age 78, of Roosevelt, passed away October 6, 2018, at his cabin in Hanna.
He was born April 12, 1940, in Ft. Duchesne, to Ross L and Lorena Denver Iorg.  He married Leanna K. Thompson on August 9, 1976, in Elko, NV.
Alan worked for many years as a plant operator at Denver Disposal, a water disposal facility.  He had also been a welder’s helper.  Alan and his brothers were very athletic and all of them were avid baseball players.  Alan had played in the minor leagues on the Wellsville Braves in 1961.  He continued with baseball after moving back to the Basin coaching many female softball teams in Vernal, playing with his family on the “Iorg Yahoos” softball team, and in more recent years, was a scorekeeper for Little League games.  His other pastimes were being in the outdoors, hunting, fishing – he still holds a state record for a Bass, and going to yard sales and estate auctions.  He had a great sense of humor, would say “Hi” to everyone, and always had a story to tell.
His family was very important to him, and he took the opportunity to visit them as often as possible.  His grandkids became the highlight of his life.
Alan is survived by his wife, Leanna, Roosevelt; his children, Alan Scott (Sareese) Iorg, Roosevelt; Chris A. (Laura) Call, Sparks, Nevada; Dina K. Call, Vernal; 7 grandchildren, 4 great-grandchildren with one more on the way; a brother, Arlys (Beth) Iorg, Hannah; and a sister, Pala (Steve) Nelson, Roosevelt; and numerous nieces and nephews.
He was preceded in death by his parents; brothers, Rossi, Elmer, and Bruce; and a grandson, Jaden Stollard.
Funeral services will be held on Thursday, October 11, 2018, at 11:00 a.m. at the Hullinger Mortuary with a viewing on Wednesday from 6-8 p.m. and on Thursday from 10-10:45 a.m.
Burial will be in the Cedarview Cemetery.

To order memorial trees or send flowers to the family in memory of Alan Iorg, please visit our flower store.