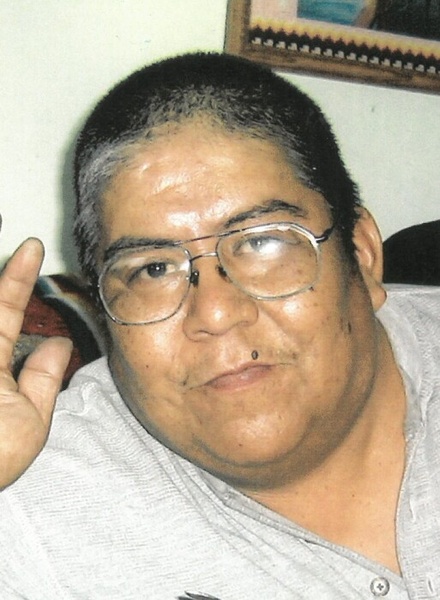 Aaron Cuch, age 60, of Indian Bench, passed away June 17, 2020, at his home.
He was born Dec. 23, 1958, in Roosevelt, to Curtis William and Geraldine Bush Cuch, and was raised by Lena & Charlie Bush.  He married Geneva Ankerpont and they later divorced.
Aaron worked at various jobs for the Ute Tribe.  He enjoyed hunting, fishing, being in the mountains, camping, and most of all “hanging out with all his Bro’s.”  He had been a fancy dancer in his younger days and traveled around to the many Pow Wows in the region.  He was very friendly to everyone and really liked having lunch and conversing with his many friends at the Senior Center in Ft. Duchesne.
Aaron is survived by his children Gina & Cyrus Cuch; four grandchildren; friend, John Reed; brothers and sisters, Doreen Colorow, Delphine Cuch, Kelly Cuch, SueAnn Cotonuts, Gwendolyn Cuch, Bill Cuch, Kim Cuch; aunt, Ina Jane Nephi; and numerous nieces and nephews.
He was preceded in death by his parents, Curtis & Geraldine and Lena & Charlie; siblings, Ruth Ellen Cuch; Blaine, Sterling, & Stanley Cuch; and an uncle Dusty Nephi.
Graveside services will be held on Saturday, June 20th at 10:00 a.m. at the John Harmes Cemetery in Whiterocks.  There will be a wake on Friday after 4:00 p.m. at SueAnn Cotonuts home in Ft. Duchesne.   The final viewing will be at the home prior to going to the cemetery.

To order memorial trees or send flowers to the family in memory of Aaron Cuch, please visit our flower store.